It gives me great pleasure to welcome you to the 32nd Annual General Meeting of your company. There is a lot of good news to share. Last year, on behalf of the SAIL collective, I had assured you that we were north-bound and there was no looking back. We have kept our commitment. Your organisation has made a grand turnaround and touched new heights in efficiency, growth and, above all, profitability. The profit of Rs. 2512 crore earned by your company in 2003-04 was the highest since inception. 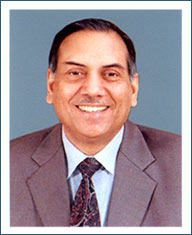 The year 2003-04 was a remarkable one for the international steel industry. After a prolonged period of depression, the industry was able to bounce back into the reckoning during the year, following strong revival of steel demand, triggered mainly by China. As the months passed, there were symptoms of all round recovery and soon the demand upsurge in South East Asia, Europe and USA strengthened the positive trend. By the end of the year there were clear indications that the steel market recovery would persist for some more time to come.

Quite in tune with the global recovery, steel demand in the domestic market also headed northward, backed by 8.2% growth in GDP during 2003-04. The Indian economy is projected to maintain a strong growth rate during 2004-05 as well. The Index for Industrial Production grew by 6.9% in 2003-04 and the growth in our industrial sector continues to be healthy. Manufacturing was up by 7.3% while the consumer durables sector grew by 11.5%. Demand for steel increased by 5% in 2003-04. Steel consumption is projected to grow by about 6% to 7% in 2004-05 with continued growth in construction and automobiles, besides improved outlook for the general engineering sector. With numerous road projects, national rail development projects, renovation and modernisation of airports and seaports, building of international convention centres and fiscal incentive to the housing sector, the Indian steel industry is likely to witness sustained buoyancy.

However, close on the heels of high steel demand, the unprecedented spurt in ocean freight and prices of raw materials are areas of concern. The situation was further aggravated by short supply of vital inputs like coking coal. This called for reorientation of strategies like use of coal tar, installation of coal dust injection facility and use of sponge iron for higher hot metal production etc.

Tracing the path of revival

Against this backdrop, our organisation has been able to script its own story of success by fine-tuning its strategy to the emerging scenario. While the favourable market was a great supporting factor, the internal initiatives for strengthening the company’s foundation provided the requisite impetus to attain the desired objectives.

In 2003-04, our efforts were concentrated on making the best of what we have – the optimum utilisation of our existing resources. We set a target of achieving 6% to 7% improvement in all areas of activity. The SAIL collective responded confidently to the call and the trend was not only set but also sustained month after month.

The result was that your company made steady improvement in techno-economic parameters. Energy consumption decreased, blast furnace productivity increased and labour productivity grew from 123 tonnes of crude steel per man per year to 137 tonnes. As the financial year came to a close, the average capacity utilisation of our major production units touched 104%. The share of production through the energy efficient continuous casting route went up to 61% from a level of 59%.

While these factors helped to reduce cost of production, the steady thrust on enhancing production through optimum utilisation of available resources continued. As a result, production of saleable steel touched a record level of 11 million tonnes, showing a growth of 6.5% over the previous year. This was supported by a steady shift towards enhancing the share of value-added items in our product basket. Exports touched an all-time high of 1.17 million tonnes, although with strengthening of the domestic market we shifted our focus to meeting domestic demand, which gained further buoyancy towards the end of the year.

Our turnaround effort was multi-dimensional. The improvement in physical performance was matched by well-synchronised plan to regain financial strength. Your company’s debt burden was reduced from Rs. 12,928 crore at the beginning of the financial year to Rs. 8,689 crore at the end of the year. This was achieved through repayment and prepayment wherever possible. Through a well-planned strategy we also replaced high interest bearing loans by low interest bearing instruments to bring about a reduction of Rs. 435 crore in our interest outgo. The net result was that your company’s debt-equity ratio, which stood at 6.5:1 at the beginning of the fiscal, improved to 1.86:1 as the year closed. There has been further improvement in the first quarter of the current year, with our debt-equity reaching a level of 1.33:1. Your company aims to attain a debt-equity ratio of 1:1 in the near future.

The success of our financial management strategy was reflected in the improvement of your company’s bottom line in every successive quarter. From Rs. 255 crore in Q1, the company’s net profit moved upward to Rs. 505 crore in Q2, then to Rs 738 crore in Q3 and finally to Rs. 1,014 crore in Q4. The trend continued in Q1 of the current financial year when we achieved a record quarterly profit of Rs. 1,112 crore.

There are a number of reasons for us to rejoice today - the record profit that we notched up, the accumulated losses that were wiped out, the impressive record that we set in surpassing capacity level of production and the significant cost reduction that we achieved in spite of the steady escalation of cost of inputs. However, more than anything, it is the pleasure of achievement – emerging as a fundamentally strong and vibrant organisation, making a determined bid into the future to retain leadership in the years to come – that holds sway over our feelings and unites us all to look ahead with new hopes and optimism.

The year 2003-04 was indeed remarkable for our company. It was a great honour when our efforts in the area of cost reduction were recognised by the Institute of Cost and Works Accountants, which bestowed SAIL with the prestigious national award for ‘Excellence in Cost Reduction (Manufacturing Sector)’ for the year 2003. The Golden Peacock Innovation Award presented by the Institute of Directors last month has further acknowledged our proactive efforts in the area of research and development. Besides these, the company has received several rave reviews in the media for authoring one of the most spectacular turnarounds in the history of the Indian corporate world.

A successful organisation has to continuously strive to increase its competitiveness and value creation ability, especially in the face of an intensely competitive market. SAIL is now set on a path of resurgence. We have drawn a roadmap to enhance the company’s competitiveness and continually create value for all stakeholders. It is my pleasure to present the outline of SAIL’s Corporate Plan-2012.

The plan has evolved after thorough analysis of the external environment and assessment of SAIL’s internal strengths and weaknesses.

Given the present rate of growth of the Indian economy and the projections for the future, the demand for steel is likely to grow from the present level of 30 million tonnes to a level of about 60 million tonnes by 2011-12. To maintain its dominant position in the Indian steel market, SAIL’s Corporate Plan has clearly defined cornerstones of growth, cost and quality competitiveness.

The growth plan envisages full utilisation of all existing assets along with technological upgradation in identified areas to raise hot metal production to about 20 million tonnes per annum by 2012 from the current level of 13 million tonnes. The proportion of finished steel will be enhanced to a level of above 95%, from the existing level of about 80%.

Quality intervention across the entire gamut of operations will be a key thrust. With technology upgradation in mines, iron making, steel making, finishing mills as well as installation of modern finishing facilities, SAIL products will be internationally competitive. In addition, functional strategies in the areas of Marketing, Operations, Human Resources, Finance and Information Technology have also been designed to support the key strategy of growth with cost and quality competitiveness.

The Corporate Plan visualises an investment of about Rs. 25,000 crore up to 2011-12. This investment would be substantially funded from internal accruals and supplemented by market borrowings while maintaining debt-equity ratio at around 1:1.

In today’s environment the priority is to attain growth with synergy. Keeping this in view, we plan to merge IISCO, our subsidiary, with the company. SAIL requires the resources for growth and IISCO provides the opportunity in terms of infrastructure, resources and excellent work culture. In a nutshell we are set to consolidate our gains and look ahead for a vibrant future.

I, on behalf of the SAIL collective, acknowledge the contribution of all our shareholders who extended unstinted support to the organisation’s sustained efforts to turnaround and regain glory. We are thankful to all our stakeholders, including the Government of India and the media, for having supported and encouraged us to achieve success. The employees of SAIL have been the prime movers in the company’s drive for excellence.

We have started the current financial year on a promising note. We are aware of the emerging threats, especially the spiralling cost of inputs. Our strength is derived from cost competitiveness and quality improvement. We are conscious of the challenges and are adequately addressing the issues. Today the organisation is well set on the path of growth, and I reaffirm our resolve to continue on the winning streak with renewed zeal and confidence.