Dear Shareholders,
It is my privilege to welcome you to the 36th Annual General Meeting of your company. This meeting is very special as we are celebrating 50th year of commencement of our production. It was on 3rd February, 1959, the President of India, Dr. Rajendra Prasad had dedicated to the nation, the first blast furnace of Rourkela Steel Plant, followed by dedication of the first blast furnace of Bhilai Steel Plant, the next day. The contribution of our employees and all other stakeholders who have been associated with SAIL in its golden journey has been immense, in building SAIL into a strong and vibrant organization.

You will be glad to know that during the year 2007-08, your company has achieved new landmarks in production at 15 million tonnes, 14 million tonnes and 13 million tonnes of hot metal, crude steel and saleable steel respectively and a record turnover & profit. Based on this performance, SAIL Board has recommended a final dividend of 18% on paid-up equity, apart from an interim dividend of 19% already paid earlier this year, taking the total dividend to 37% - the highest ever.

It was around this time last year that we were trying to understand the full implications of the US sub-prime crisis and its effect on the global business environment. The consensus view was that the world economy will slow down as the developed world comes to grips with the problem, but continued strong growth in China, India & other emerging economies will moderate the overall impact.

The anticipated downward trend in the economies of developed countries so far has not been as intense as expected earlier. However, commodity prices have been ruling very high, with slow down in the global growth momentum. Inspite of some moderation in GDP growth, India continues to be one of the fastest growing economies in the world. However, the challenge posed due to the inflation in the country, has turned out to be much bigger.' 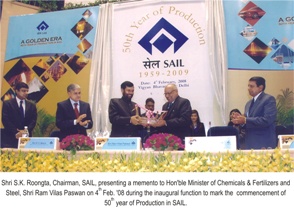 The growth prospects of the Global steel industry continue to be upbeat, with projected growth of more than 6% in the demand for finished steel for the years 2008 and 2009. The world crude steel production has registered a healthy growth of 6.1% in the first seven months of the year 2008.

In the recent past, the global economy witnessed substantial rise in prices of commodities, including metals. In case of steel, price rise has largely been a result of all-time high prices of inputs such as coking coal, iron ore & ferro-alloys etc., with strong demand lending its support. This unprecedented rise in prices of the key inputs has pushed the production cost for steel industry to a new high level. However, strong global demand even at these price levels, indicate the underlying growth impulse of the consuming sectors.

Indian Steel Industry
Your company and Indian steel industry has come under the conflicting pressures of contending with sharply rising input costs, yet need to contain its product prices in order to check inflation. The industry has responded to the Government's concerns on steel price rise. However, with country again becoming a net importer of steel, as a long-term solution, it is imperative that new production capacities come up. Moderating the prices inspite of substantial increases in input costs and yet maintaining margins to generate resources for further investments, is going to be a tough challenge for the steel players. It is against this backdrop that we see our current performance and future plans. 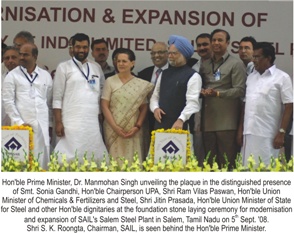 SAIL : Performance and Plans
It gives me a great sense of satisfaction and pride that your company continues to scale new heights - year after year. The record turnover & profits during 2007-08 have been achieved on the back of the best ever production, sales, and operating efficiency parameters with capacity utilization at 118%. Production of value added/special grade steel items during 2007-08, went up by as much as 28% over CPLY. We could also bring about significant reduction in energy consumption by over 3% during the year. This thrust on cost reduction has continued in the current financial year too. Besides, production of value added steel has further been stepped up in Q-1 by 40% over CPLY. Accordingly, inspite of input cost pressures, profitability in Q-1 of the current financial year has also been the best for any Q-1 so far.

The essence of organizational excellence, however, goes much beyond the mere physical and financial numbers that highlight operating performance. It is essential for a company to anticipate the unfolding changes in the business, and reorient its approach and strategies accordingly.

A big break in the growth trends of the Indian steel industry is clearly visible. While there could be some ups & downs, it is clearly established that India has entered a steel-intensive phase of development. The steel demand will continue to be very strong probably in double digits for a prolonged period. By the year 2015, our country is set to emerge as the second largest steel producing and consuming nation in the world.

The rapidly changing steel landscape in the country is bringing about numerous challenges as well as opportunities. The challenge of growth is well recognized. Your company is decisively moving towards expansion of its capacity to over 26 million tonnes of hot metal production. It is a matter of honour and pride that foundation stones for expansion & modernization of three of SAIL plants, including at Salem last week, were laid down by the Hon'ble Prime Minister. Your company is also preparing a blue-print for the sustained growth beyond 2012.

We also anticipate a change in the way steel has been traditionally marketed. To effectively tap hinterland demand, and to further enhance brand equity for our quality products, your company added about 1200 new district dealers in 2007-08, bringing the total number to around 1900. With this, we have the unique distinction of having a distribution set up in each & every district in the country.

Another area of challenge is to develop new, superior grades of steel that provide enhanced value to the customers. Your company has been at the forefront in developing new grades of quality steel including for projects of national importance. Some of the new products developed during 2007-08 include earthquake resistant TMT & wire rods with improved corrosion resistance, vanadium micro-alloyed rails for application in tracks for higher axle load at high speed, steel armour plates for the defence sector, etc.

After commissioning of new facilities post-modernisation, your company will be able to add a number of new products in its portfolio such as wide width plates, wide flange beams, API grade steel up to X 100, head hardened rails, etc. 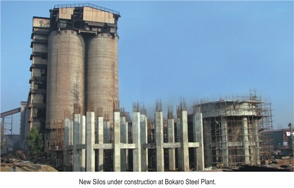 A Special Economic Zone (SEZ) is being developed at Salem, Tamil Nadu for which formal approval has been accorded by Government of India.

Securing Raw Materials
Your company has ensured full availability of iron ore for its steel plants by stepping up production to about 26 million tonnes from its captive mines during 2007-08, up by 7%. The requirement of iron ore would go up to 42 million tonnes post current phase of expansion. For meeting these requirements, linkages have been formulated between plants & mines and plans have accordingly been made for development of the mines. Your company is vigorously pursuing with the State Governments for the renewal of mining leases and forest & environmental clearances. We plan to develop South and Central blocks at Kiriburu and Meghahatuburu as a replacement to existing mining operations at these mines. The Govt. of Jharkhand has recently sent its recommendation to the Central Government for these blocks. Mineral Exploration Corporation Limited (MECL) has been engaged for exploration of SAIL mines to assess the quality & quantity of mineral deposits. Your company has also initiated the process of development of four million tonne per annum capacity coking coal block at Tasra, along with a captive washery and also for development of Sitanala coking coal block. 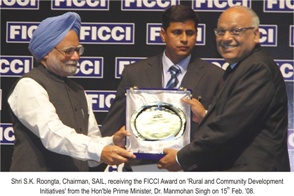 Greening Environment
Your company has embarked upon a well laid out environment management plan to fulfill its responsibility towards current and future generations. To tap the carbon benefits under the Clean Development Mechanism (CDM) of the Kyoto Protocol agreement, 71 potential projects have been identified across plants. We are actively associated with fora like Asia Pacific Partnership for Clean Development and Climate, New Energy and Industrial Technology Development Organisation (NEDO), and International Iron and Steel Institute (IISI) for adoption of energy and environment friendly technology. Phasing out of ozone depleting substances has been taken up in the SAIL plants under a UNDP programme.

Transforming Lives
Your company believes that any enterprise ultimately exists to enrich the lives of the communities it operates in. We already operate one of the largest health and education infrastructure run by any corporate entity in India. Taking our social responsibilities a step ahead, your company has taken the initiative to develop 79 villages across 8 states as Model Steel Villages for providing medical & education facilities, roads, sanitation, income generation schemes, etc. and such jobs in 13 of these villages have already been completed during 2007-08.

Your company also started free schools and health centres in its steel townships especially for the underprivileged. More than four hundred medical camps were organised throughout the country benefitting over five lakhs of needy population. Your company has a well-planned policy to nurture talent in various sports, including athletics, hockey, football, archery, etc. You would be happy to know that Shri Sushil Kumar, Beijing Olympics bronze medalist wrestler & quarter finalist Shri Yogeshwar Dutt were identified by SAIL and extended financial support for their preparations since January 2008 upto Commonwealth Games-2010.

In recognition of its CSR initiatives, your Company has received numerous awards during the year, including the prestigious FICCI Award on 'Rural and Community Development Initiatives', presented by the Hon'ble Prime Minister of India.

Accolades
Your company's excellent performance has got due recognition from different quarters and a few need special mention. SAIL bagged the SCOPE Gold Trophy for 'Excellence & Outstanding contribution to the Public Sector Management' for 2006-07. Fifty one employees of SAIL received Vishwakarma Awards 2006, declared in September'07- 43% of the total awards in the country. Your company was adjudged Best Employer - 2007 amongst PSUs by CNBC TV -18 and Watson Wyatt and also bagged ICWAI National Award for Excellence in Cost Management 2007 in manufacturing sector- first position among PSUs. SAIL's Quality teams won eight Gold, two Silver & two Bronze medals at International Convention of Quality Circle 2007, Beijing - highest number won by any Indian company

Corporate Governance
Your company is committed to conforming to the highest standards of Corporate Governance by ensuring transparency, disclosures and reporting as required under various laws, regulations and guidelines, including those issued by Department of Public Enterprises.

Acknowledgement
I would like to thank the esteemed shareholders for their support and encouragement in making 2007-08, a year full of achievements. I am thankful for immense support extended by the Board, our stakeholders and members of SAIL collective. I also wish to put on record, my sincere thanks for the guidance and cooperation extended by the Ministry of Steel, Government of India, State Governments, and other Organisations & Institutions.

As we celebrate our 50th year of production, we salute the vision, grit and determination of the numerous steel men who continue their quest to strengthen the country and touch the lives of millions of Indians by adding 'a little bit of SAIL in everyone's lives'.