The Indian Iron & Steel Company (IISCO), a SAIL subsidiary, was amalgamated with SAIL on 16th February 2006 and renamed IISCO Steel Plant (ISP). This full-fledged integrated steel plant is one of India’s oldest. Established as an industrial enterprise in 1918, IISCO produced iron from an open-top blast furnace at Hirapur (later to be called Burnpur) in West Bengal for the first time in 1922. The plant was progressively upgraded to a capacity for production of 4.26 lakh tonnes of saleable steel and 2.54 lakh tonnes of pig iron annually. The plant manufactures a range of products, over some of which it holds exclusive market dominance. Iron & steel produced by it has been acknowledged as being of the finest quality.

After undergoing a modernisation-cum-expansion programme, the crude steel capacity of the plant has been raised to 2.5 million tonnes per year.

Situated at a distance of about 200 kms from Kolkata in Burnpur on the banks of the perennial Damodar river in West Bengal, ISP is well connected by both South Eastern and Eastern Railways and National Highway 2. Its proximity to Kolkata and Haldia ports is an additional strength. 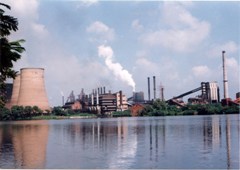 IISCO held the proud distinction of being the owner of India’s “oldest unit producing pig iron by modern methods” at Kulti on the banks of river Barakar near Hirapur. An open-top blast furnace set up in 1870 by a company known as Bengal Iron Works Co. (BIW) founded by James Erskine pioneered production of iron in India in 1875. The same unit at Kulti also pioneered steel production in India through small open-hearth furnaces in 1904-06. BIW was absorbed by IISCO in 1936 and steel making started as a regular measure in 1939. Another company named Steel Corporation of Bengal (SCOB), incorporated in 1937, was also amalgamated with IISCO in 1952. SCOB’s Napuria Works and IISCO’s Hirapur Works in unison came to be known as the Burnpur Works of IISCO. The Burnpur Works underwent two overlapping expansion in 1953 and 1955, increasing its production capacity to 1 million tonnes of ingot steel and 0.8 million tonnes of saleable steel.

As the flagship business enterprise of Martin Burn House, IISCO had acquired iron ore mines at Gua and Chiria in what is today’s Jharkhand state and collieries in Chasnalla and Jitpur (also in Jharkhand) and Ramnagore (in Bengal). These captive sources of high quality raw materials gave IISCO a major competitive edge and enabled it to establish a prestigious reputation in domestic and foreign markets. It also became the first Indian blue chip company to have its shares traded at the London Stock Exchange. The Burnpur Works of IISCO reached its pinnacle of performance during the 1960s and produced more than a million tonnes of ingot steel. 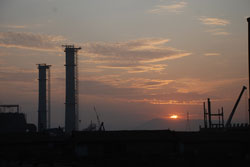 Despite growth plans, however, a combination of factors drove the company into stagnation and decline, resulting in lack of investment for technology upgradation to meet emerging market competition. IISCO was nationalised in 1972 and became a wholly-owned subsidiary of SAIL in 1979.