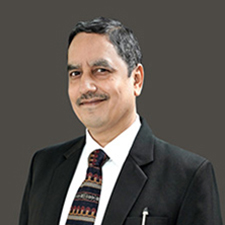 Shri Shashank Priya is a civil servant belonging to 1988 batch of the Indian Revenue Service (Customs and GST). He is presently serving as Additional Secretary and Financial Advisor in Ministry of Commerce & Industry with additional charge of the Ministry of Heavy Industries & Public Enterprises, MSME, Textile and Steel.

Shri Shashank Priya has more than 30 years of experience of dealing with issues relating to indirect taxation and WTO. He has worked on GST issues in various capacities like Joint Secretary GST Council, Additional Director General (GST) and Commissioner, GST.

Shri Shashank Priya has a decade of experience of handling WTO issues. He has worked for five years as a Professor in the Centre for WTO Studies in the Indian Institute of Foreign Trade and dealt extensively with issues relating to WTO and Trade Facilitation. He also worked for 5 years in the Trade Policy Division of the Department of Commerce as Deputy Secretary/Director. He has represented India in negotiations in WTO Ministerial Conferences in Cancun, Geneva and Hong Kong as well as in numerous WTO Committee meetings.

He has acted as a resource person for several reputed institutions and made numerous presentations on GST and WTO issues before national and international audience in India and abroad. He was the Academic Coordinator for long term WTO Regional Trade Policy Course for Asia Pacific Countries organized by the Centre for WTO Studies in collaboration with WTO, Geneva in 2011 and 2012.

He has also worked in different field formations of Customs and Central Excise such as Central Excise Division, Anti-Smuggling, Appraising, Vigilance and Export Promotion.

He has contributed articles on WTO issues in newspapers/journals and has written two books, namely ‘Review of Trade Policies of India’s Major Trading Partners’ and ‘Trade Facilitation Gap Analysis for Border Clearance Procedures in India.’ He also wrote a paper for UN ESCAP, Bangkok on ‘Cross-Border Paperless Trade.’